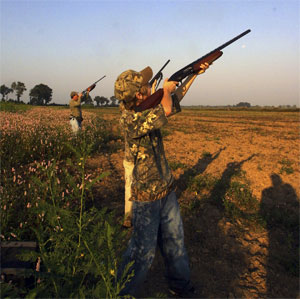 GRAYSON CO., TX --  Dove season is here once again.  Hunters can take to the fields starting Wednesday, Sept. 1st in Texas and Oklahoma.

Local game wardens say they'll be on the lookout for anyone violating the law, especially those who go over the daily limit and who are hunting without a license.  The wardens also say they think it might be tough for dove hunters this season.  Texas Game Warden Dales Moses says, "It's looking a little bit sparse.  There's pockets of dove.  But as far as overall, we're not seeing a whole lot of dove.  But the whole key is trying to find where they're at.  There'll be places where they'll be covered up with 'em.  But in general, we're not seeing as many dove as we normally have this year."  Dove season in Oklahoma runs until November 9th.  Dove season in Texas ends October 24th, but picks up again from December 25th to January 9th.