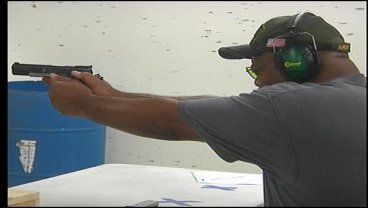 SHERMAN, TX--You may recognize this man, but don't be mistaken. He didn't star in the television series MASH. . .

"It's actually a deformity from when I was born," Jason Webb said, Red River Firearms owner. "If you ever watched MASH, Radar O'Rilley on MASH actually has the same deformity as I do on my hand, and now this is the way I can pay it back."

Jason Webb never served in the military, but has several family members and friends who have.  Knowing the emotional impact that war injuries have on soldiers and their families, Webb is doing his part to serve his country.

The owner of Red River Firearms held an "Operation Warrior Shoot" where all proceeds go to veterans in need.

"Yea I've got friends and family members that have been in the military and either active or retired and this is a way I can support them due to the limitation I have on my left hand," Webb said.

Dave Anderson is a marine veteran, and just a few years ago he was brutally injured.

"I was wounded by two rounds of I-55 rounds--blew thorough my leg, my stomach and out my back," Anderson said. "Gave me a head concussion and I was blind for a few days."

The Wounded Warrior Project has supported Anderson. Army veteran Darryl Nelson says that's why it's important to keep it going.

"The military and veteran affairs--they can only do so much," Nelson said. "Sometimes we need other people to step in and fill those gaps--fill those needs."

Those needs were fulfilled Sunday with a competitive shoot off.

As the shells hit the floor, these shooters were helping those who defended their country.

"Vets helping vets, civilians helping vets," Nelson said. "They need all the help they can--especially those injured coming back."

"Because when you're over there, you're just like everybody else," Anderson said. "You're doing your job. It's the job you signed up for--so if you get injured that's part of the job, just like any other job."

A service that these men and women made sure didn't go unrecognized.

The operation warrior shoot off was also held in conjunction with a motorcycle ride Saturday. The red river firearms owner says that he hopes to hold this competition every year so he can help those who have served.

For more information on the Wounded Warrior Project, visit http://www.woundedwarriorproject.org/.