Runners Hit the Pavement and Raise Money For United Way 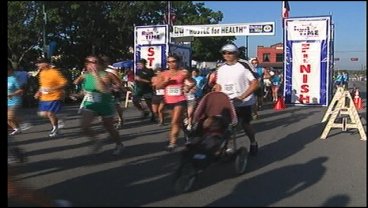 SHERMAN, TX--The fit--and those trying to get fit--hit the pavement early Saturday morning, and it wasn't just to burn calories. It was to raise money for those who really need it.

"Running is important. It's a good stress reliever for everybody and it's really nice just to see all these people you know all coming together for one cause," Chris Nunley said. "It's really nice."

United Way kicked off its 2010 Campaign with sneakers. It's the first year that United Way held a "Hustle for Health Fun Run" in conjunction with it's annual fundraiser.

"We approached them with the idea that let's do something that ties in with physical fitness since CIGNA is actually about health promotion so we decided a 5k, 10k would be perfect," Kellie Metzdorf said, CIGNA Vice President.

The courses included a fun run, a 5k and a 10k--and the runners were ready to conquer them.

"It's just a challenge, it's something I've never done that I've always wanted to do and it's a challenge to myself," Erin Conklin said.

Richard Amezquita has been training with his wife for months. They're getting ready to tackle a half marathon in San Antonio this November.

"We try to do like 30 to 35 miles a week to try to keep up to it and then you run six miles, and you run three then you'll run four, so you just vary it," Amezquita said.

"That's why we're here--to make the community aware of how much money it takes to run a campaign to provide all the agencies with the money they need to provide service to the community," Tina martin said, united way board president.

While toning their thighs, these runners also gave a little bit to the needy.