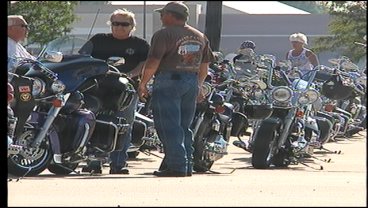 TEXOMA--Dozens of bikers could be considered Warriors this weekend.

Money raised from the motorcycle run goes to veterans in need.

More than 50 bikers took off from the Texoma Harley Davidson.

"The things that this organization--Wounded Warriors--they furnish a lot of things for the guys coming home and when they get back--especially the ones in pretty bad shape, it's a tough deal," Les Duncan said, Army Veteran.

"And you suddenly find out we all bleed red, we all have mothers, we all have fathers we all have sisters, brothers and children and we just would rather live in peace because a true warrior really prefers peace, but he's prepared to go to war to defend freedom," John Gillin, Navy Veteran.

Traveled to the VA in Bonham, then returned to Loy Lake Park.

There will be a competitive shoot at Red River Fire Arms Sunday at 10 am.