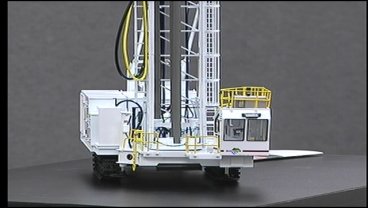 DENISON, TX--A manufacturing company is looking to expand in Denison. By growing, they say more jobs may be brought to Texoma.

Friday, the Denison Development Alliance and the mining equipment company Bucyrus agreed to an incentive contract.

Representatives from the company say they will invest $6 million into infrastructure at its Denison plant. Bucyrus officials say that this growth may mean more jobs.

Bucyrus has promised the city of Denison that they'll invest up to $6 million into the plant on Denison's far west side. The mining equipment company says that they might offer more jobs in Texoma.

"When you look at what you manufacture, naturally, and consolidate, the obvious choice, we think, and everyone else has in the place where you already dedicated and focused on the manufacturing of drills," Alan Walker said, Bucyrus general manager.

In February, the Milwaukee-based company Bucyrus acquired the Terex Corporation.
The $6 million will expand Bucyrus' manufacturing facility and office space in Denison. In return, Denison Development Alliance will give $107,000 to the company over the next five years.

"Anytime we see that kind of expansion of a physical plant and the addition of jobs for Denison Texas, that's positive," Harry Kirshman said, Denison Development Alliance Chairman.

According to a Bucyrus press release from mid-August, jobs at the Denison plant will increase by 35 percent, half of which will be manufacturing jobs.

Company representatives wouldn't specify exactly how many jobs will be created, but they hope to bring in as many as 100 by an unspecified date.

"We were a great fit for them to move their drills that they manufacture in Milwaukee to Denison because we already know how to do that and are good at it," Patti Fanning said, Bucyrus representative.

In a tough economy, more jobs could hopefully generate more revenue Denison, as well as the whole Texoma area.

Bucyrus hopes to complete this capital expansion by November. In response to the job openings, the company has received 848 applications so far.