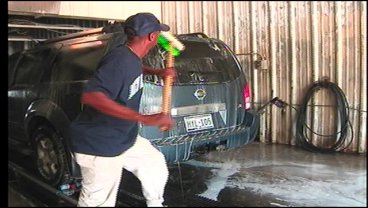 SHERMAN, TX--It's been five years since Hurricane Katrina swallowed a city, but it didn't wash away the memories. One Sherman man still recalls his home being surrounded by several feet of water.

This man washes cars now, but five years ago, his own cars were under water.

"Couldn't even see my cars you know, and nothing else--just debris floating around and houses going from side to side just floating up and down the street," Kenneth Lindsey said. "You could just hear a lot of mayhem-people crying and screaming and hollering for help."

The car washes here may be only three minutes, but the man who washes these cars--his story could last much longer.

Kenneth Lindsey is a Katrina survivor--the hurricane that nearly swallowed the city of New Orleans.

"And as you can see, the water coming down that's when the scrambling started," Lindsey said. "I had to move three dogs up in the attic, plus my girlfriend--she was handicapped--I had to get her up to the attic, all we can do is sit up there and pray."

Lindsey and his girlfriend at the time, Shelly, were stranded in their attic for two and a half days. As soon as a wildlife and fisheries boat came to rescue them, he and his girlfriend could only bring a bag of clothes, leaving their dogs behind. They headed to the Superdome, but Lindsey returned to the flood scene with a spare tire as his flotation device.

"It didn't matter to me if I made it or not," Lindsey said. "I just wanted to see as many people saved as I can. Just to see the bodies floating around in the water--trying to help the people and everything. That's about the best I could do to survive."

He spent three days wearing a spare tire and wading through water, trying to guide stragglers to safety. He reunited with his girlfriend at the Superdome and spent days there, before volunteers came with a bus to transport them to Dallas.

Lindsey has been working as the manager at this Sherman car wash for four years.

Kenneth Lindsey says he still has two daughters and a son who are trying to rebuild their lives in New Orleans.

He's thankful that Texas has accepted him and so many others as new residents.