Wounded War Veterans Are Given New Homes in Gunter 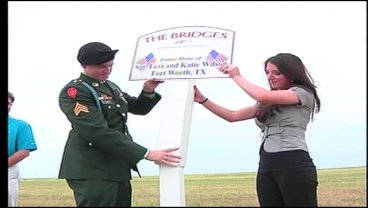 GUNTER, TX -- Thanks to a Houston organization, five wounded war heroes and their families are being given their dream home in Texoma. Deeda Payton was in Gunter, Texas where she spoke to two of the families who just learned where their new homes will be located.

Operation FINALLY HOME honors wounded and disabled veterans and widows of fallen soldiers with new homes. For many families, it's the beginning of the rest of their lives and the backdrop of a lifetime of memories. "I understand how hard it is to adapt after coming back from combat, but to come back with a severe injury where it cripples the whole family and you spend two and half years in a hospital to recover then be told you can't get a mortgage because you have no job from what you've just recovered from. It's not acceptable to me," said Daniel Vargas, Executive Director of Operation FINALLY HOME.

Sgt. Levi Wilson, Jr. and his wife Katie of Fort Worth, TX are one of five families who have been given land and their own custom-built home to help transition into civilian life. "It's a shock. We were very very blown away. Extremely excited. Overwhelming," said. Sgt. Wilson.

The Wilson's new home will be in the Bridges at Preston Crossing, a new community in Gunter, Texas. "They'll have a house, they'll be in a wonderful community and they'll be able to start a foundation which is what America was built on and obviously as they build a family they're just going to have an incredible starting point," said Dan Koscher the CEO of Bluegreen Communities which is the development company that started the bridges.

Wounded veteran Sgt. Alan Hornaday of Fordyce, AR will also be moving into the bridges community. He too has been surprised with a new home. "I'm excited about it. I mean the drive up it's just the perfect place it's what we've pretty well dreamed of," said Hornaday.

Organizers of operation FINALLY HOME say it's the least they can do to give back to our heroes of war. "A 300-thousand dollar home is in no way a means to payback what they've sacrificed and given us," said Vargas.

Bridges' Developer, Bluegreen Communities, is providing the land and the home. Operation FINALLY HOME was started by Houston's Bay Area Builders Association and is sponsored by the NAPE Expo, the world's largest oil and gas exposition.