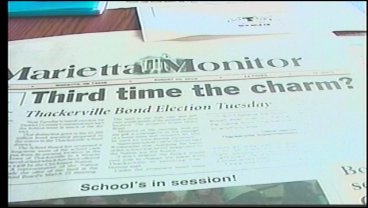 THACKERVILLE,OK--The third time was not a charm for the Thackerville school bond.

On Tuesday night, voters in Thackerville,OK voted down the bond for by a vote of 55% to 45%.

School board members put the issue back on the ballot to raise money for a new school and gymnasium.

Superintendent Dave Herron declined to comment on camera but says he wanted to thank all of those who voted for the bond.

High School Principal Brian Armstrong did comment on the vote.

"Alls we can do is put it to the people and, you know, they have spoken by their vote [Tuesday], so we'll have to live with that. We'll go on educating kids and do what we need to do," Armstrong said.

Armstrong says he is unclear on the school's next move