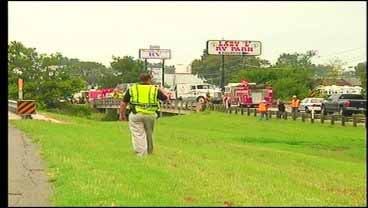 SHERMAN, TX --  There was a deadly accident Tuesday morning in Sherman on Highway 75, in the same spot where a tour bus crashed killing 17 people two years ago.

Sherman police say the driver of an 18-wheeler was heading north on Highway 75 when his truck veered off the highway and slammed right into the bottom of Post Oak Creek.  The driver, Jesse Jerry, Jr. was killed instantly.  Sherman Police Lt. Bob Fair says, "Well, they're gonna look at cause of course and to see what happened.  Is this a vehicle failure?  Did he fall asleep?  Is there intoxication involved?  Of course we have no evidence of anything right now.  But that's of course the things they'll be investigating when they look into this."  Crews had to shut down Highway 75 for nearly two hours while they pulled that truck from the creek, backing up traffic for miles.