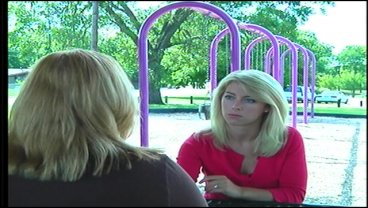 SHERMAN, TX -- We're taking a closer look at the dangers of online social media. In Sherman, a mother confronted a man accused of an inappropriate relationship with her teenage daughter on the popular social networking website, Myspace. She shared her story with KTEN's Deeda Payton.

Myspace is a well-known social networking site. Where people of all ages interact online. The only thing is you don't always know who you are communicating with. That's what happened to one 14-year-old Sherman girl and now one of her Myspace "friends" is behind bars. Fortunately the mother did find out about it and they were able to intercede and contact the police department and we were able to make the arrest," said Sgt. Bruce Dawsey of the Sherman Police Department.

The mother, who asked that her identity be protected, says a man carried on a two-month online relationship of a quote "sexual nature" with her teenage daughter, only she didn't know who she was really talking to on Myspace. His profile lacked a photo. "It was actually her friend that said something. It was when she was contacted and he told her he wanted to meet here that they realized the situation was to a point where they couldn't handle themselves," said the mother.

The 55-year-old boarded a plane from Nashville to Dallas. Then he rented a car and drove to Sherman so they could meet in person. The girl's mother went along. "I was very scared," said the mother.

The mother says she waited in the car while the man introduced himself to her 14-year-old daughter and her 16-year-old friend and then she confronted him. "He backed away from them a little bit. I was angry at that point. I wasn't paying much attention to him. I just wanted to know what was going on. Who are you? Why are you talking to these kids? This my child and her friend," said the mother.

She says he didn't seem to think anything was wrong, but she called police. James Christopher Fox was taken to jail accused of solicitation of a minor.

The mother says while his true identity was revealed, she knows there are others out there who are still hiding behind their computer. "I hope that if there is someone else that he may be talking to in this area besides my daughter that their teen will go to their parent or to someone a teacher or counselor and say look I know this person I've seen him on Myspace," said the mother.

The 14-year-old is still on Myspace, but her mother says she is more careful with who she friends.