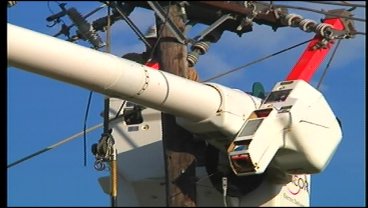 SHERMAN, TX--A storm that passed through Sherman in minutes left behind thousand of dollars in damage.

"Then I got a call from the business down the street saying that my roof was flapping in the wind, and after the rain stopped, and I came down to see what my roof looked like, this is what I saw," Steve McGaughy said, A-American Self Storage manager.

What some witnesses thought was a tornado was a storm that ripped through the Sherman area in seconds. A microburst has left power lines down and roofs torn.

Close to Texoma Parkway up to Gallagher Road, a radio tower was struck down and power lines lay limp on the road. Several homes were left without power.

One witness says he saw a dark cloud in the distance.

"The big storm, you could just tell it was pretty much separated from the whole sky," Todd Rusche said, witness. "We kinda sat back and watched it because we really didn't know which way it was going to go or whatever."

ONCOR employees hope to repair the damage by early Tuesday morning, undoing what a storm destroyed in just minutes.

An ONCOR representative says that Sherman residents should have their power back on by midnight. The damage was severe enough to require some power lines to be replaced.