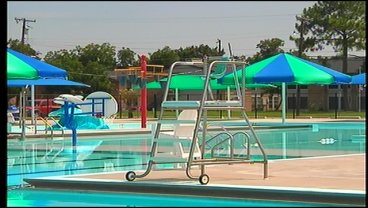 SHERMAN, TX--Swimmers who were looking to cool off at the pool last Friday may have found only a puddle. The Fairview Pool in Sherman had to cancel its noon open swim, simply because there wasn't enough water to even get in.

The pool was found with only two feet of water in the deep end after 6:00 AM Friday. Officials say that a valve was turned on some time between late Thursday night and early Friday morning, sending more than 320,000 gallons of blue water to the sewer.

Damages are estimated to be more than $6,000. It includes the cost of water, chemicals, and labor to refill the pool.

However, officials say they're lucky the damage wasn't any worse.

"We're just really fortunate that when he got here Friday morning, there was still probably about 3,000 to 4,000 gallons of water, and if it dried out completely, it might have burned up our pumps, and caused even more damage," Theresa Hutchins said, Sherman Parks & Recreation Manager.

It took employees eight hours to fill the pool.

The Parks and Recreation Manager thinks the act was vandalism and not an accident.

The suspect could be facing felony charges if convicted.