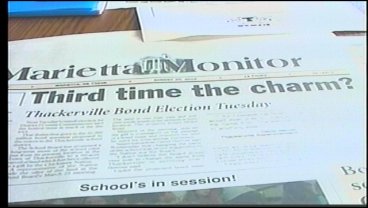 Thackerville residents will vote tomorrow on a bond for a new school and gymnasium--a bond residents voted down twice already.

Some residents we talked to say they believed the new building would not have a cafeteria but Superintendent Dave Herron says the school will have a lobby area used as cafeteria space.

Herron says, on occasion, the school would need to bus meals from the old building to the new.

Supporters of the bond say it is the right time for the project. Others are still concerned about the tax increase with the bond.

"The bond is a really good thing so our school has the opportunity to grow and to offer more programs to the kids, just to be able to have more classroom space, for classes that need to be split up," said Bryce McCage, member of the organization Better Schools for Thackerville.

"At this time the way the economy is, people can't afford it." said concerned citizen Bill Sprouse. "Now it's already [been voted on] twice and they've never clarified themselves exactly what they want and how they want to do it."

School officials disagree and say they have been up front and clear about the process.