"Passing the Boot" Hits Close to Home for Sherman Firefighter 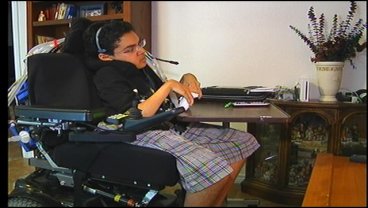 GRAYSON COUNTY--It's not unusual to see fire departments across the nation raise money for the Muscular Dystrophy Association, but for the Sherman Fire Department, it hits close to home.

Gerald has been a Sherman firefighter for more than two decades. The money put into these boots goes to the MDA, and to Gerald's 14-year-old son who has muscular dystrophy.

"It touches me inside that people are willing to help kids that they have no idea who they are," Josh Brown said, diagnosed with muscular dystrophy. "It's just out of the kindness of their heart."

Josh is a typical 14-year old. He starts high school this week, is a good student, and likes to play video games--except that he uses these wheels--instead of his feet--to get around.

"School was hard," Krista Brown said, Josh's mother. "School was hard and it wasn't the experience of school itself, it was knowing how to prevent problems."

The money raised from the fill the boot campaign goes to MDA medical equipment and a camp for kids who have the same condition as Josh.

"Seeing that I'm not the only one in the wheelchair," Josh Brown said. "Like other people have the same experience as I do."

This chair may not be the only way Josh gets around someday. His older brother is in medical school at Brown University, hoping that someday he can find a cure.

"Part of his motivation was for what he's doing in pediatrics is because of Joshua," Krista Brown said. "They were very close. Good buddies."