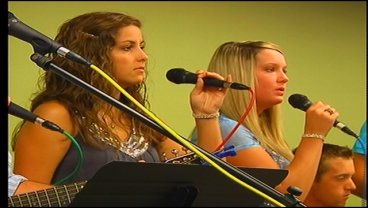 DENISON, TX--A Denison church youth group just returned from a mission trip to learn that extending a hand can make a difference.

A typical Sunday for these teens includes singing to live music and being entertained by their teachers.

A couple of weeks ago though, some students brought their prayers to Tokyo and New Orleans.

Those who visited New Orleans caught of glimpse of a building that now has its worship services outside in a tent.

"Now when you ask Japanese people do they know what God is or who God is, most of them will say yes now but five years ago they wouldn't, and it's all form this trip that I went on," Cassy Butters said, who returned from the Tokyo mission trip.

"Well, there were houses that were all boarded up and there was stuff laying all over the ground, and there was just a lot of destruction there," Jake Maresh said, who returned from the New Orleans mission trip.

While in New Orleans, students gave hygiene bags, flip flops and other items to those in need.