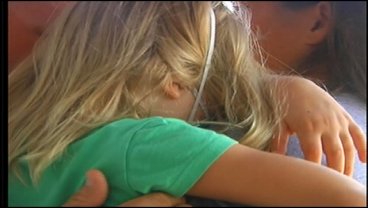 POTTSBORO,TX--A Pottsboro girl who spent 12 days in a Dallas hospital is finally back home. She was greeted today by family and friends who spent their Saturday donating blood for her.

An active, smart 4-year-old--as described by her grandmother--Katy Whaley loves to be outside.  A few weeks ago though, her mother noticed something was wrong.

"She had bruising on her shins and little spots on her arms and she had some on her neck and legs and then inside her cheeks," Kim Whaley said, Katy's mother.

Katy's parents soon took her to the hospital. On August 9th, they received devastating news. Katy has leukemia.

"You know with her being sick, it's just you know--it's my baby--my baby girl," Jason Whaley said, Katy's father.

Katy and her family spent 12 restless days at the Children's Medical Center in Dallas.

"Oh we were all devastated. Very scared-not knowing just the news of getting it," Tami Volcik said, Katy's aunt. "It was very surreal."

This Saturday, family and friends banned together to donate blood and platelets for Katy. Every donation will be credited to her cure.

Doctors say that Katy has the most common and curable form of leukemia. However, she still has a two and a half year journey ahead of her before full recovery. Until then, she has to see the world behind this mask.

"The mask is mainly like construction around a lot of people or, you know, its where like I noticed outside they were mowing," Jason Whaley said. "Any where dust is blowing--anything she can inhale."

A trust fund has been set up for Katy to offset her medical expenses. People can visit any American Bank and donate in her name.

"It's so heart warming, just that the support from the community has been overwhelming," Volcik said.

Until she is well, Katy will be in the prayers of her friends and family.

As of 2:15 Saturday afternoon, more than 40 pints were donated. People were still waiting in line.