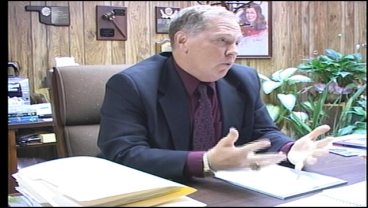 LONE GROVE--The Lone Grove speech and debate team is under fire once again.

At the first of June their 7-time state championship coach was removed from his position.

Back in June, the Lone Grove School Board removed speech and debate coach Brian Gunter after taking his team to state 7-years in a row.

The decision outraged parents and students who spoke out at a school board meeting in June.

Both the school board and Superintendent Todd Garrison refused to comment about their decision.

On Wednesday afternoon, Fred Collins, an Ardmore attorney who has volunteered to help speech and debate students at Lone Grove for the last twenty-two years received a phone call from Lone Grove Principal Russell Noland.

"He told me that it was his duty to ask me that I needed to turn in my keys. Given the circumstances that it would probably not benefit anybody that I was affiliated with the speech team this year so I said I understand that," said Collins.

But students don't understand. Collins showed us a text from a student yesterday, after the students were notified, that read, "Why don't you want to help us?"

"The people that are being hurt are the kids that are currently in that program that have been looking to this as a possible way to get scholarships to go to college," said Collins. "Some of those kids are good enough to qualify for good scholarships right now but not having the ability to compete their junior and senior years is going take away from their marketability."

Collins says he felt like he needed to stand up for the students who many say are stuck in the middle of a horrible situation.

"It's only what I feel that's happening to the kids that I currently work with that I'm saying anything about it at all. Otherwise I wouldn't, because those kids are the ones that are being hurt and that upsets me in that respect."

Collins says he respects the school's decision but he still doesn't understand why the students are being forced to suffer.

"I would really wish that the school board would revisit the issue for the benefit of the kids," he said.

For now, the three speech and debate classes have been combined into one and the superintendent is still refusing to comment.