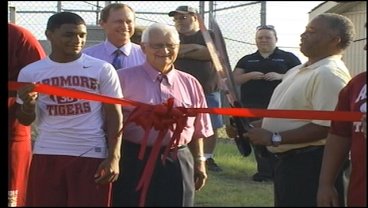 ARDMORE,OK--There was a big celebration in Ardmore Thursday morning.

Meredith Saldana was there and she has more on the story.

The new water tower that's being constructed on North Commerce was raised on Thursday.

Here's a look at the celebration.

It's been a long time coming-- plans for the new multi-million dollar water tower have been in the works since 2003.

In the last few months it's been under construction.

On Thursday, more than one hundred people showed up for the festivities--including the high school football team, cheerleaders, band, and many city leaders and  residents.

The ceremony was topped off with a ribbon cutting and with that the signal was given to raise the tower.

It only took a few hours for the tower to go from near the ground to looking more like your average water tower.

Just a few days ago we told you about nearly forty-five citizens who donated more than  $21,000 to help pay for the Ardmore High School logos that were recently added to the tower.

Glen Burns helped collect that money and said the donations came with a challenge to students.

Students are excited about the challenge and say the logos are already encouraging them.

"It really gets us pumped," said Sampson. "and its really going to get us pumped for September third when we beat Ada."

"It's exciting. I'm glad to see that there's some pride in the community. They're excited about the logos, excited about the water tower going up," said Public Utilities Director Shawn Guerin. "For us, the Public Utilities Department, a lot of our projects aren't seen by the public other than the actual construction cause everything goes underground. But for this one, this is one that everybody can see and hopefully they're proud of."

The tower will hold two million gallons and residents won't have to worry about their water being shut off to fill it up.

Instead, it's a gradual process.

The tower will be completed and ready for use around the first of the year.