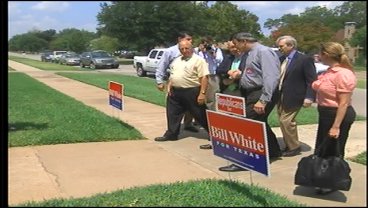 DENISON, TX--In the sluggish economy, both the Republican and Democrat candidates running for governor see education as the key to keep Texas jobs.

"Would the private sector match that? And you know, much of private colleges and universities have been funded by some philanthropy," Bill White said, former mayor of Houston. "It's a way to get that philanthropy in to build some of the research institutions that we need."

Incumbent Rick Perry has made efforts of his own.

"Governor Perry has always made education a top priority ( . . . ) under his leadership, financial aid for college has increased by 909 percent." Catherine Frazier said, spokesperson for Governor Rick Perry.

How Texas spends its money in the classroom is being debated.

Last week, President Obama signed a $26 billion bill to save thousands of teacher and state jobs, requiring states to spend a minimum amount on education. The blue and red tickets are split on how they would--or if--they would utilize the federal dollars.

"If the strings attached what we exceed, we'd say no, but that would be a matter of math. We would need some more money coming back to our state since we're paying that money in federal income taxes," White said.

"It essentially would punish Texas for its efforts to spend tax payer money wisely," Frazier said.  "Governor Perry believes that those decisions should be made up to the legislature."

In a matter of weeks, decisions on education could be made by the future governor.