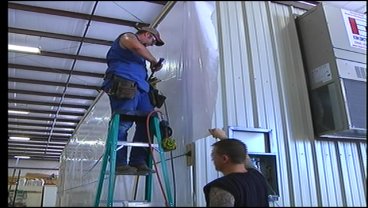 DURANT, OK -- Turning tragedy into triumph in Durant, OK.  In the aftermath of the deadly shooting rampage at Ft. Hood, TX last fall, a Durant company is hard at work.  And it's meant new jobs for Texoma at a time when so many people are looking for work.

Icon Construction in Durant makes modular buildings.  Those would be things like portable classrooms we see all the time.  But, about 80% of the company's business is with the military.  That's why company leaders weren't surprised when the military called and said it needed more than a dozen buildings, in a short amount of time, to be used at Ft. Hood.  After the mass shooting at Ft. Hood last November, several of the buildings on post were closed.  They're considered evidence in the upcoming trial of shooting suspect Maj. Nidal Hassan.  So, the company hired a couple dozen local residents and got to work.  Icon Construction President James Bell said, "We went from a staff of 40 folks everyday to a staff of 60 folks everyday in order to not just build these buildings but to complete the jobs in front of them so that we could get these to the Army faster."  Several of the buildings are already finished.  Workers are still busy finishing half a dozen more.  The entire order of 18 portable buildings is expected to be delivered to Ft. Hood next week.