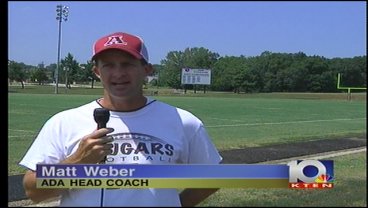 ADA, OK -- Third year head coach Matt Weber is excited about how this season is shaping up for the Ada Cougars. The defense is the side with the most experience. Six guys are third year starters. However on the offense, there are only two returning starters.
Always a favorite in Oklahoma class 5A, Ada has a new district this year, but Coach Weber still has the same Ada goal.
So the Ada Cougars seem ready to start the season, which begins September 3rd against long-time rival Ardmore.