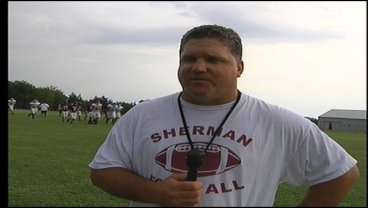 SHERMAN, TX -- The Sherman Bearcats are under season number two with head coach Gary Kinne, and he feels confident going into the season. And while I was out at practice with Sherman, rain forced us all to move inside to finish the day. But there was no slowing down.  And even with the tougher district, coach Kinne feels the leadership coming back from last year will take this team on to where they were last year. So while the offense is set and ready to go, Kinne's focus is to have one of the best defenses in the district. "We've got a lot of offensive fire power coming back, and we expect to be good over there, but our defense is going to have to step up and we think we can, but that's one area we are trying to really emphasize," Kinne. "I think they're going to be pretty good this year. The got a lot of potential coming in this year, and they've been working hard along with the offense," said Zac Whitfileld. You will be able to watch Sherman's first game next Friday on our Texoma FanJam Game of the Week. We will be going with the Bearcats to The Colony.