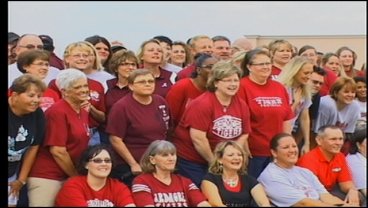 ARDMORE,OK--Ardmore teachers and staff got into the school spirit Wednesday morning.

Teachers and staff from the middle and high schools gathered around the new water tower for a group photo.

They did it to kick off the new school year and the staff says they are excited about the upcoming year and the new paint job on the water tower.

"The students and our school are the hub of this community and I was really excited when I saw Ardmore tigers instead of just the name Ardmore. I was glad they added the Tigers to it." said Patricia Castleberry, high school special education teacher.