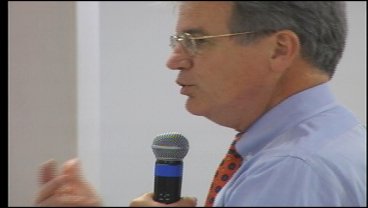 Madill,OK-- Senator Tom Coburn continued his trek through Oklahoma, stopping this time for a town hall in Madill, Oklahoma.

The town hall was held at the First Baptist Church where a nearly full crowd asked him questions on the economy, social security, immigration, and other issues.

Coburn used much of the town hall to blast what he called the federal government's wasteful spending and incompetence when it came to balancing the budget and spending.

The Senator said he will focus on exposing waste and inefficiency in the government when Congress comes back from its recess.