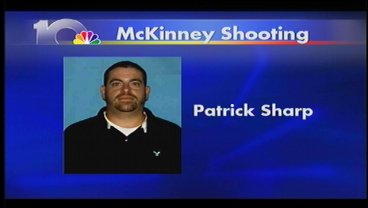 McKINNEY, Texas (AP) - Investigators say a gunman who pulled into a McKinney police station parking lot with a trailer loaded with explosives, set fire to his pickup then started shooting --
apparently hoped for a massacre.

Patrick Gray Sharp of nearby Anna died after a shootout with officers yesterday.

McKinney police Chief Doug Kowalski says it's unclear whether he was killed by an officer's bullet or one of his own.

A motive is sought. Kowalski says the gunman had a plan and was heavily armed. Investigators found an assault rifle, a shotgun and a handgun on Sharp. Kowalski says Sharp fired at least 100 rounds at the police station, and the chief counted at least 23 bullet strikes on the
building.

Sharp's roommate, Eric McClellan, told The Associated Press by phone that he was on vacation outside Texas when he received calls from troopers and his stepfather telling him what happened. McClellan, who left Texas earlier this week, says Sharp was "fine and dandy" when he departed.

Shortly after the shooter was identified, ATF agents, the FBI and local authorities descended on Patrick Sharp's home in a rural area of Anna. Those who lived near the shooter say they are stunned.

"I mean I heard about it, but I never thought it'd be in my neighborhood where he lives," said Zach Wolf, who lives near Sharp's home. "I drove by there everyday going to work, seeing his truck in the driveway. That's why it's kinda shocking to me."

Police believe Sharp acted alone, but are still working to determine if anyone else was involved.