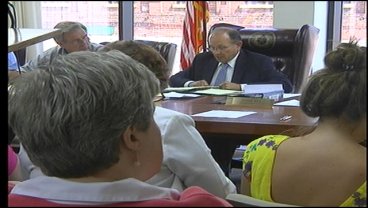 COOKE COUNTY--Keeping the budget out of the red is the talk in Cooke County. Up to 14 positions are on the chopping block because of budget constraints.

In a 4-1 vote, the Cooke County Commissioners decided to cut their budget by about half a million dollars.

Those aren't the only cuts. As many as 14 Cooke County employees may be given the pink slip.

The Cooke County 2011 budget is more than $30 million, half a million less than what they're currently operating on.

14 Cooke County positions may be eliminated due to budget constraints. Nine positions--mostly clerical--will be given the pink slip, but five jailer jobs are still in the air.

"Contingent on the fact that we actually bring in revenue--enough revenue to keep the pot open," John Roane said, Cooke County Judge.

There may not be enough prisoners to keep the five jailers employed.

"And they told us we would make money by renting it out to prisoners and other counties that had extra prisoners and its obvious we're losing money every time we do that," Steve Gaylord said, Cooke County citizen.

"I think you hear just as many people say, well by closing the jail and losing those jobs, we don't have the opportunity to take on any more prisoners if we had to," Roane said.

Roan says the cuts were made to prevent an undue burden on tax payers. To keep the budget afloat, county taxes were raised from 45 cents to more than 46 cents per $100.

The tax raise was made because many properties--including the wind farm--have depreciated, generating less tax revenue.

"The advantage of what we're doing is making these cuts before they become a real problem, Roane said.

The jail's budget is reviewed monthly. If they can't stay in the black, the five jailers will be given a month's notice before they're let go.