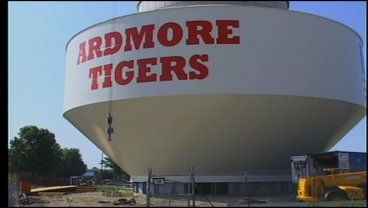 ARDMORE,OK The City of Ardmore is close to finishing its new water tower -- covered in American and Ardmore Tiger spirit.

You may have seen it recently on Commerce St. with the Ardmore School mascot and now the American flag.

It was actually local citizens who pushed to have the extra decorations on the new tower --at a total cost of nearly forty thousand dollars.

That was more than what was originally budgeted, but, thanks to citizen donations, the city only paid seventeen thousand of that amount.

Even with a tight budget, Ardmore city officials say the money spent is well worth it.

"Nobody wants to see a tower go up blank," said Ardmore Utilities Director Shawn Geurin,  Everybody, on the other hand, would be asking why wasn't something placed up. I think the towers and logos that are on it are going to give a lot of pride to the Ardmore School system."

"I personally think that's a lot of money to be spending on painting. I think there are probably more important things the city could spend their money on," said local resident Julie Reuter.

"I think it's a great idea," local resident Christopher Poledouris said, "If it's supporting the community and it's going to back our high school, I think they should go for it."