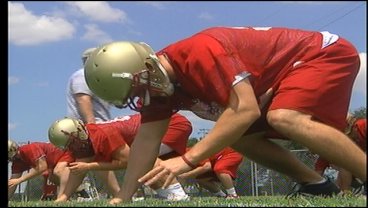 SHERMAN, TX--College football practice is underway in Sherman this weekend.

The Austin College Kangaroos hit the field this afternoon. They're optimistic for this upcoming season.

The head coach says that they have 97 players--the largest roster that he's seen in years. The team has all new coaches but one this year--five of which have coached at Austin College before.

The new staff plans on using different offense and defense strategies than they've done in the past. Dawson says that he's got a line of seniors that are ready to take on the season.