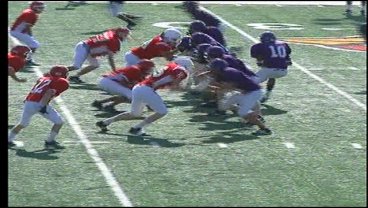 The Warriors and the Cardinals went head to head at the Pottsboro high school stadium.

It was the first scrimmage for the junior varsity Bonham Warriors and the Pottsboro Cardinals Saturday.

This year, Bonham has 67 players overall while Pottsboro has 80.

"Improvement over a year ago," Dale Trompler said, Bonham Head Football Coach. "That's what we're looking for. We want to make sure that we take steps forward each week and work hard to get some wins."

"We're excited about it," Matt Poe said, Pottsboro Football Coach. "We think we've much improved over last year. You know we're really concentrating on blocking and tackling. That was our deficit last year and that's kind of the two football fundamentals, so that's what we worked on. Hopefully today that will show up."

Both coaches filmed the game, just to see how much their teams have progressed.