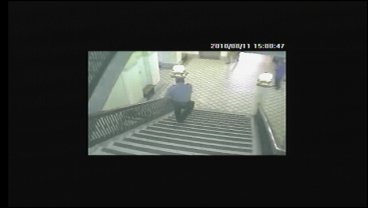 CARTER COUNTY, OK - - A man who took off running from the courthouse and authorities trying to arrest him was caught on tape.

The man was about to be arrested at the court clerks office in Carter County, when he took off running, Tuesday afternoon.

The video shows him running out the door, down the stairs with officer John Ryan chasing him.

He made it out the door and a couple blocks away, all caught on numerous surveillance cameras at the courthouse.

In the end, the man was caught  and arrested.