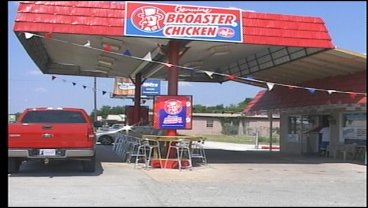 ARDMORE, OK - - In money news, new business is quickly moving into Ardmore, namely restaurants. This is the first of a two part series, Meredith Saldana shows some new businesses in the area. We begin with a restaurant on the northeast side of town.

With the current state of the economy it seems opening a new business is risky, but the owners of Pattillo's may disagree.

"Actually, we were going to do gas and we're just so busy in here that we didn't have time for it," says Pattillo.

So a quick change of plans, a 36' long island picnic table was built around the pumps and with some changes inside came Pattillo's restaurant.

"We felt another place could do well on this side of town and so far the town agrees."

They opened last month selling Broaster chicken and salads and the salads may taste familiar.

Jerry used to work for Pretty's Salad Company in Ardmore, then worked in industrial foods for 40-years, which caused some minor issues when it came to making smaller servings.

About 60 customers came in during the hour we were there.

New costumers were greeted with an explanation of how the chicken is cooked and a free sample piece of chicken.

First time customer Angie Hawkins says, "Well I thought it was pretty cool, just to give us a sample because sometimes you know you buy lunch and don't really know what you're getting."

While the food did seem to be quite popular, so is the massive picnic table at the pumps.

"They love it, the woman, just really crazy about it. We just thought it was a great idea."

Pattillo and his employees say they're humbled by the support  from the community.

His next step, building a Pattillo's in Ada.