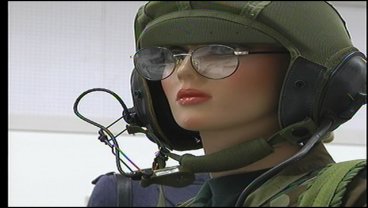 DENISON, TX--After their museum has been closed to tourists for weeks, the Perrin Air Force Base Museum has found a new place to call home.

In the late 1950's, the F86D was state of the art. It now sits at the entrance of the North Texas Regional Airport.

"No navigator, no radar operator--you did it all. It was a good airplane. It was an electronic nightmare--we thought--but it was a good bird," Lieutenant Colonel BJ Long said.

Long flew this exact plane. Now, it's mounted on a pedestal for display. Just behind the plane is the new Perrin Air Force Base Museum. All week, many air force artifacts are being dusted off and will be shown to the public for the first time.

"We've had numerous items that we just had stored like we have a bugle up there [. . .] blew an arms to stay in the first World War and things of that nature. Dan Stange said, Perrin Museum Director. "We've got but never had the space to exhibit it."

The new museum is three times the size of the old one, which was tucked away towards the back of the airport.

"Our biggest complaint we had from visitors is they couldn't find us, and now we're just right there on the central drive, and when you drive in, you see the jet, and then we'll have a big sign here out front," Craig Summer said, museum curator.

The relics aren't the only reason to take a field trip to the museum. Many of the curators are air force veterans themselves.

"Well, I was part of it, so I think it should be preserved," David Williams, veteran, said.

"Well, we started the museum, and we feel this is a part of it, and it took us three years to get this air plane on the mount," Long said.

The history of Perrin and service men and women are being preserved--their lives now being imitated by mannequins.

Museum volunteers are planning for a grand opening in early September.