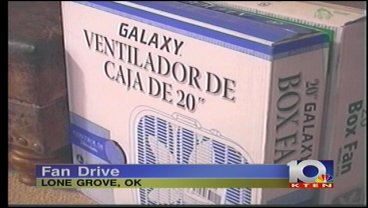 LONE GROVE, OK- - These extreme temperatures can be deadly. In fact, in Oklahoma alone, the state medical examiners office says there were nine confirmed heat-related deaths last year and one so far this year. That's why we're trying to help. As part of our annual fan drive, Meredith Saldana delivered a fan to a family in Lone Grove. She has more on this story.

It's all about Texomans making a difference.

We've been asking for donations for a few weeks and now it's time to see how the fans are helping others.

Mary Castleberry is staying with her grandsons this summer in Lone Grove.

The rising temperatures have made it difficult to keep the home cool.

The house has reached 84 degrees during the day with the air conditioning running.

Castleberry has numerous health problems and says for her the fan donation means the difference between life and death.

"Getting the fan is very important," says Castleberry. "I am an amputee and with my prosthesis it makes me a lot hotter than normal people and I am also a heart patient and an insulin diabetic. So that means I have to stay cool and I cannot get dehydrated."

If you'd like to donate a fan you can stop by the KTEN studios in Ardmore or in Denison.

If you need a fan, you can call T-Cog by dialing 211 and request one.