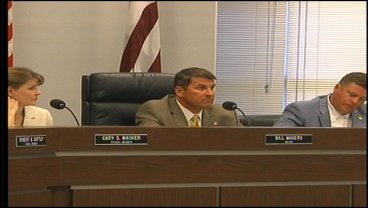 SHERMAN, TX--Some big changes are in the works for the city of Sherman. Monday night, city council held an open forum to see how citizens felt about possible changes to the city charter. Among those changes could be moving city elections to November--and a pay increase for the city council.

Sherman's City Charter--or constitution in other words--could go through some changes if voters approve of them this November. One amendment proposes a pay increase pending the budget can afford to give city workers a wage increase.

City council members have been paid the same stipend for 27 years.

For every meeting, council members are paid $50--the mayor $75. Those dollars may double to $100 per council member and $150 for the mayor. The new values were calculated with the Consumer Price Index.

Another amendment would move the city election from May to November.

"You get more voters for less tax payer dollars--to me that's a democracy in action," Magers said.

Holding it at the same time as the county election could save Sherman $30,000. Also, city officials say that few voters make it out to the polls in May.

"Basically if you have it in conjunction with the November 2nd election, you have the cost saving with not having to duplicate and election twice," Lund said. "You have a better turn out to vote on the people and you get a lot better representation on the places you like people to vote for."

City council members say they won't accept the pay increase until city workers can get a wage increase. Voters will get to decide in November.