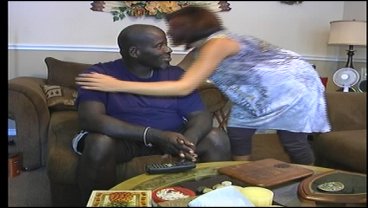 SHERMAN, TX -- Congestive heart failure ultimately forced Sherman Police Officer, Jerry Stigger, into retirement and placed him on a waiting list for a transplant. Now, he is speaking out about his disease and its hereditary nature so that others who have heart disease in their family will have their heart checked. Deeda Payton has his story.

Stigger says he is waiting to be placed on the waiting list for a new heart. It's a rigorous process, but it's a chance that his late father and brother never got. They too suffered from congestive heart failure.

For seventeen years, Billy Stigger put his life on the line as an officer with the Sherman Police Department. Now that he's retired, his life is on the line for different reasons, health reasons, because Stigger is battling congestive heart failure. "When we found out a couple of weeks ago just how bad off he was it was devastating," said Sherman Police Chief, Tom Watt.

The diagnosis forced Stigger into retirement and changed his life forever. "I learned that I was not a police anymore when the doctor came into the ICU and said you're not a cop anymore. You can't go back to work, in fact, if you get out of this hospital you will probably have maximum two years to live," said Stigger.

Stigger says he couldn't believe what he was hearing, but quickly realized he had been diagnosed with the same disease that took the lives his father and brother. "You're so fortunate to have good health and you always think you will have good health but that's like everything else it's not guaranteed," said Stigger.

Today, he is hoping and praying that his name will be added to the waiting list for a heart transplant. "That's one of the things I have a problem dealing with is someone has to die in order for me to live and I'm not excited about that," said Stigger.

It's stories like Stigger's that show just how important a heart checkup can be and if heart disease is in your family history, a screening could mean life or death.

The Sherman Police Department along with the Texoma Regional Blood Center are holding a blood drive for Stigger Wednesday, August 11th at the police department at 317 S. Travis in Sherman from 6:00 a.m. until 5:30 p.m.