Denison Crash Claims the Life of a Texas Woman 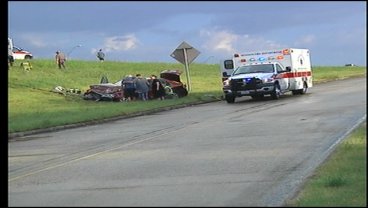 DENISON, TX - - Saturday evening's sudden downpour is believed to be the cause of a fatal, two car wreck.  It happened Saturday, just after 7 O'clock on Highway 75, just north of the Morton Street exit.

Two vehicles were involved, a car and a truck.

Denison police tell us a Ford F-150 was headed northbound on 75, hydroplaned across the median and struck a car head on.

The passenger in the car, 72-year old Ann Marie Theken of Royce City, Texas was pronounced dead at the scene.

The driver of the truck was taken to a local hospital.

His condition is unknown at this time.