Back From Biking 3,000 Miles for Peace - KTEN.com - Texoma news, weather and sports

Back From Biking 3,000 Miles for Peace 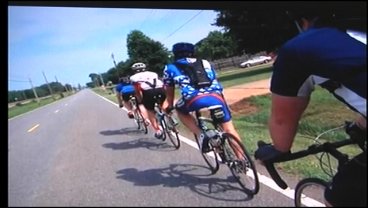 SHERMAN, TX -- A group of college kids is back in Sherman after biking 3,000 miles across the country this summer spreading a message of peace for the Republic of Congo in Africa. Deeda Payton has been following their journey and has more.

Two months and 3,600 miles later, a group of college students are back in Sherman. "It's a little crazy that five guys who most of whom hadn't ridden a bike before rode across the United States," said 21-year-old Will Watson.

They pedaled their bicycles from coast to coast blowing the whistle on the war in the Republic of Congo in Africa for the peace organization falling whistles. "I knew that people didn't really have an understanding of what's going on and so it was really exciting to see how people changed, like you could tell what was going on in their head that this story had really impacted them," said 19-year-old David Watson.

In addition to riding their bikes eight hours a day everyday for nearly two months they also spoke about their cause in 60 different cities across the country. "The only way the war is going to end is if a lot of people hear about it and there's a lot of awareness raised so that's what excites me about it," said Will Watson.

The students also got to see the countryside in a way not many people ever will. "It was really cool. It was one of the things I was looking forward to about the trip is getting to see the whole country in this slower way than if you took a car," said 20-year-old Andrew Childress.

It was a trip of lifetime for these young philanthropists and hopefully the beginning of the end for a war zone that kills roughly 1,500 people a day in the Republic of Congo.

For more information on the Falling Whistles organization visit http://www.fallingwhistles.com/about.php