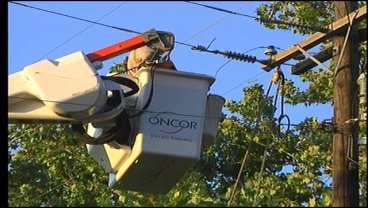 DENISON, TX-- Wednesday evening around 7:00, many Denison residents experienced a power outage. A conductor overheated and melted due to too much electricity being used at the same time.

An ONCOR representative says that the only thing that could pull that much power could be air conditioners.

After the conductor was serviced, the power was back on by 8:30 PM, but that doesn't mean that an isolated incident like this couldn't happen again.

"A lot of the older houses in Denison--they were built in the 1940s or 1950s, back in those days, air conditioning was not a big item, so they weren't built and constructed to facilitate that type of electricity need," Bill Ray said, Assistant Denison Fire Chief.

Trying to cool your home by more than 25 degrees is like putting a unit on overtime, causing it to break down--or worse if not maintained properly--become a fire hazard.

ONCOR says to limit air conditioning usage and use ceiling fans instead to make sure a system doesn't become overheated.

Air conditioners are designed to cool the air outside by 25 degrees. With temperatures exceeding 100, it's not unusual for a unit to only be able to get a home down to 80.