Golf Games and Memberships Decline Due to Tough Economic Times 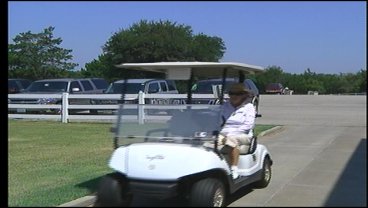 GRAYSON COUNTY, TX -- Country club sports are suffering in today's economic times. Golf is proving to be out of the budget for many families across the country and in Texoma. Deeda Payton reports.

Even golfers who can stand the hot temperatures are falling victim to the recession. Golf pros across our area say they are seeing a decline in memberships and rounds as residents try to cut back on expenses.

There's a lot less activity on golf courses today than there were a few years ago. Tanglewood Resort in Pottsboro is one private club that has experienced a decrease in golf memberships over the last five years. Mike Fish, the golf manager, says he attributes a large portion of that decline to the economy and to more competition in the area, but he says the impact hasn't been significant enough to cause layoffs or cutbacks. "Actually what we're seeing is maybe a little bit of improvement this year over last year. Revenue seems to be stabilized especially with bookings at the hotel seem to be going up from where they were last year and we expect a good fall and a good start to next spring," said Fish.

Fish says one of the biggest trends he is seeing is in the amount of rounds being played.  he says hotel guests and corporate groups are cutting back on the amount of golf they are playing in an effort to cut their own costs. Fish says he isn't selling as much merchandise from the pro shop as years past either.

Nationally, the number of golfers is down as well about ten percent from 30% from 30 million in 2005.