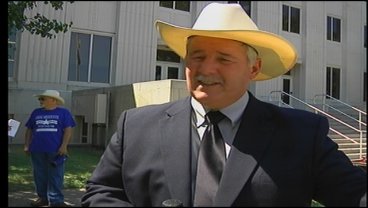 One of Gilbert's main goals, he says, is to reform the state's agriculture department. He plans to start with food safety and consumer protection, and focus on protection for land owners when it comes to eminent domain.

On the steps of the Sherman courthouse, Hank Gilbert spoke of his proposals. He says he looks at this 23-city tour of Texas as a job interview and wants the public to know that he is not a career politician and if elected plans to bring about change to the ag department.

One of those changes is the way the state claims public and private land through eminent domain. "If it invades the local economy by taking land out of production, hurts the industry by taking the land out of production then the agriculture department is going to say no. Eminent domain can not be exercised on this piece of property," said Gilbert.

Gilbert also pointed out the recent health scares from contaminated food produced in the Lone Star State.  He says these incidents of salmonella and E-coli prompted him to develop the Texas food safety and security initiative which is a proposal that would require all food safety inspections to be centralized under the Texas ag department. Gilbert says too many things are falling through the cracks which is why he believes the Texas ag department needs reform.