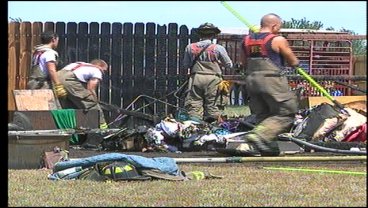 CALERA, OK--Around 2:45 PM, the Calera Fire Department received a call about a shed on fire.

The fire happened east of Calera off of State Highway 70 on Liberty Road.

The fire chief says that the shed is a total loss--estimated to be several thousand dollars.

Many items were destroyed, including a riding mower, four wheeler and much of the fence.

The cause of the fire is still under investigation.