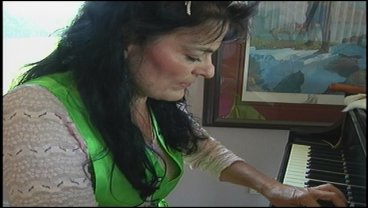 ANNA, TX -- There's a lot of talent in Texoma and one Texoma pianist is using that talent to spread her love for Native American music and culture. Deeda Payton sat down with Lisa Thomas who just returned from two performances in our nation's capitol.

Some may call it the pinnacle of one's career, performing at the Kennedy Center and the Smithsonian Theater, but for Lisa Thomas it's just some of the perks. She says her goal is to celebrate her heritage through music that the public can enjoy.

Some people have a way with words. Lisa Thomas has a way with music. It all started when she was just seven years old. Now she is playing to packed houses across the country. "It's not so much about the performer it's about getting across this beautiful piece of music and how you want people to hear it," said Thomas.

Thomas just returned home to Anna, Texas after two performances in Washington, D.C. "I get nervous every time, but that means you just really want to do a good job," said Thomas.

Her first performance was at the Smithsonian Theater. The next night she took the stage at the Kennedy Center. "That was just so awesome. You just walk in and you feel like you're in a place where so many wonderful artists have performed and your just in the aura of greatness of so many people," said Thomas.

Thomas has made it her goal to spread her Cherokee heritage through her music and that goal is music to her fellow Native American's ears.

Thomas also teaches piano lessons and says the only thing that makes her mad is when her students use the word can't. It's a true testament to her passion and commitment.