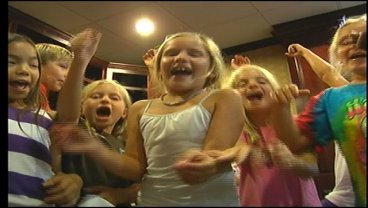 DENISON, TX--Seven to eight year olds from all over the country will be up to bat this weekend for the Dixie World Series, and they're bringing their families, which could mean big bucks for Texoma.

Nearly 200 players will be up to bat at the Dixie Darlings World series this weekend. One team from Georgia drove nearly 16 hours just to get to the tournament.

"We only stopped one hour to eat, so we've been up all night watching movies and listening to the girls sing songs, tease each other, pick each other and have a good time," Heather Mccullough, Gray Georgia Coach, said.

Many of these players have brought their siblings and families along, which brings more than a half a million dollars to the local economy. This hotel--like many others-- is booked for the weekend.

"It wasn't as busy last year," Jessica Langley said, Holiday Inn Express manager. "I mean it was busy enough, but this year its just incredible. We're completely sold out all weekend, so it's fabulous."

At the Holiday Inn Express in Denison, teams from Georgia, South Carolina, Mississippi and Florida are setting up camp. The players are taking up 20 rooms, but their family and friends are taking up another 30, which is nearly 2/3 of the entire hotel.

"I love these girls to death," Mccullough said. "They're like my whole family. We've all gotten so use to each other. We've been doing this for what--two months now? I just adore them."

"We're so happy to have them here," Langley said. "They've been very gracious to us. We understand its hard to travel so far from home. We want this to feel like home to them."

Many players will be with their families, which could make it seem more like home away from home.

11 teams are in Denison getting ready for the youth softball world series.