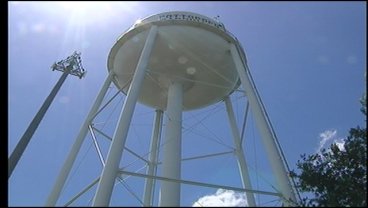 TEXOMA--Ground water is limited, which is why Texas has had regulations on it for the past century. Depending on who is permitted to drill--and how much--could change the water supply for future generations.

The state of Texas is debating whether to change regulations on drilling for ground water, and depending on what they decide, it could mean less water for Texomans.

"In the state of Texas, ground water is perceived to be owned by the landowner," Jerry Chapman said, Greater Texoma Utility Authority General Manager.

Currently, groundwater in Texas is regulated by the 1904 Rule of Capture, meaning that the landowner has the rights to the water underneath.

To make sure that they don't run out of the resource, Pottsboro uses both surface and ground water. The city was awarded 5,000 acre feet of Lake Texoma water in June, which will provide them with 5 million gallons a day.

"Having surface water allocation, allows you not to rely on that ground water," Kevin Farley said, Pottsboro City Manager.

Perhaps one of the biggest consumers of water is the Barnett Shale, a natural gas reserve.  To get the gas, pressurized water must be used to break down rocks. Sometimes as much as 3 to 5 million gallons must be used at a time, which can put a strain on water supply.

"There are many cities in the area that are still totally dependent on ground water," Chapman said. "I would not expect that there would be any shortages in the near term . . . the long term who knows."

In the next 50 years, aquifers could run dry if drilling for water isn't regulated. Pottsboro is prepared. Currently, residents there use 250,000 gallons a day, which is only a fraction of their potential supply.

"It would allow us to grow, and be assured if you will that we have the water resources to supply that growth as it happens," Farley said.

In other communities, depending on water supply, future generations could be affected.

As of this June, 50,000 acre feet of Lake Texoma water will be given to North Texas communities. Texas legislature is expected to take action next session.