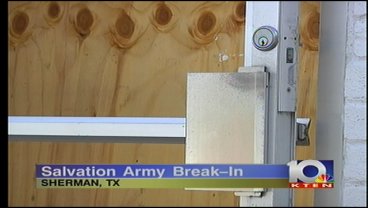 SHERMAN, TX -- Sherman police are looking for the man who broke into the Salvation Army's Family Store. Deeda Payton reports.

Wednesday night someone tried to steal from the Salvation Army Family Store in Sherman. Police got a call of about a man throwing a brick through the building's side, glass door. The crook then forced open the cash register, but it was empty so he ran off empty-handed.

"It's frustrating because we like to give folks options and whoever did this had an option. They could have come seen us and received some assistance, but it's just frustrating for us," said Captain Don New of the Salvation Army.

Because the Salvation Army has such a high deductible for insurance, the captain says they will just have to absorb the cost to repair the door.