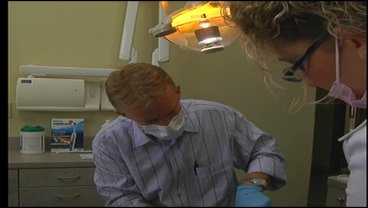 DENISON, TX -- Mark your calendar, a free dental day has been announced by the Denison Dentist, Dr. Stephen McAnaney. Deeda Payton has the details.

Over 100 million Americans lack dental insurance coverage, according to the U.S. Surgeon General's office. It's a staggering statistic that dentist Stephen McAnaney knows all too well. "Boy I tell you there's such a need in this country and right here in Texoma," said Dr. McAnaney.

A few months ago, Dr. McAnaney's office in Denison held a free dental day as part of the national non-profit organization "Dentistry from the Heart" and the staff said they were blown away by the response. "The turnout was, I don't know why I thought it wouldn't be that big, it was many, many, many times bigger than I ever anticipated," said Dr. McAnaney. "We were just overwhelmed by the need but I was mostly overwhelmed by the appreciation," said dental hygienist, Bonnie Pere.

Hundreds of Texoma residents were treated by McAnaney's dental group that day. "Because I don't have a job and I don't have dental insurance so when I saw that I thought it was the greatest thing and I had been wanting this for a long time so I was happy about it," said patient, Ramona Palmer.

It's because of this great need that Dr. McAnaney's office is hosting a second free dental day for anyone over 18. It will be held Friday, August 13th in Denison starting at eight a.m. all patients will need to bring identification and list of any prescriptions they are taking.