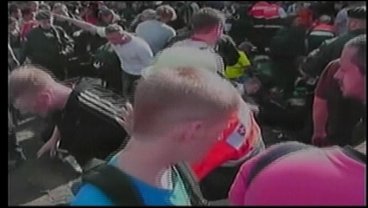 SHERMAN, TX -- The death toll is rising following a music festival stampede in Germany. The Love Parade on Saturday was so over-crowded that thousands were trampled, hundreds injured, and now 21 people are dead. Deeda Payton spoke to a Texoma teen who was at that concert in the midst of the chaos.

18-year-old Katherine stayed with a friend, an exchange student, who she met while attending Sherman High School. He suggested they go to the music festival, the Love Parade, which is a famous concert in Germany that has been going on since the fall of the Berlin Wall.  Once they got there, though, Katherine says she could see it was a recipe for disaster. "Well to be honest from the very beginning when we got there I saw all these people crammed into one small area because the city that we were in only holds a population of 500,000 and 1.4 million people showed up to this event," said Ailshire.

The concert was only about three hours in when Katherine says the trampling started. "That's all I saw just a mass people. I unfortunately saw one of my friends break her leg in this whole incident and that was terrifying," said Ailshire.

Then she heard people were dying. "One of my friends that was in the group unfortunately had to pass over one of those 19 people to get out," said Ailshire.

Katherine wasn't injured, and says she was able to call her parents before they heard about it on the news. "I was terrified, I was terrified. I just wanted to make sure she was safe," said her mother.

It was a frightening experience that young Katherine says she will never forget, but not in the way she thought she would remember her graduation gift.

While Katherine watched the Love Parade turn into a nightmare, she says she was pleasantly surprised by the people in Germany who she describes as very compassionate and caring. She says they offered the shoes off their feet to her so she could escape the chaos.