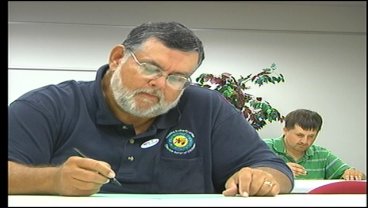 DURANT, OK--Just a couple of hours before the polls were about to close, many citizens made sure to cast their vote--thanks to the people who work at the polls.

These election workers have been here since 6:15 in the morning--and they don't get a lunch break--so they make sure to bring one from home.

"I'm glad to do this because I think it's very fulfilling and I think its a very worth while job to do," Mary Schmidt said, Bryan County Precinct 8 Judge.

Many voters say that they're concerned about the economy.

"Budgets and how our money is brought in and distributed out," Mark Rawlins said.

"The way our economy is going right now. I mean, everyone wants it better," Jeff Lee said.

Jobs and education aren't the only things on the minds of Oklahoma citizens. Candidate morals are important as well.

"Most of the time it's morals for us--as far as abortion and things like that," Amy Melton said.

"What they'll do for our community here and overall economy," Dean Sweney said.

By November, many of these voters will make it to the ballot box again, hoping to elect officials that can represent them.

"There are so many decisions that need to be made and I want my decision to be made too," Schmidt said.

Which is why these workers forgo their lunch break--to make sure that voters are heard.

Most of the winners tonight will face off in November. August 24th is the runoff for candidates who don't have at least 51 percent of the vote.