Brothers on a better path after YouthBuild experience 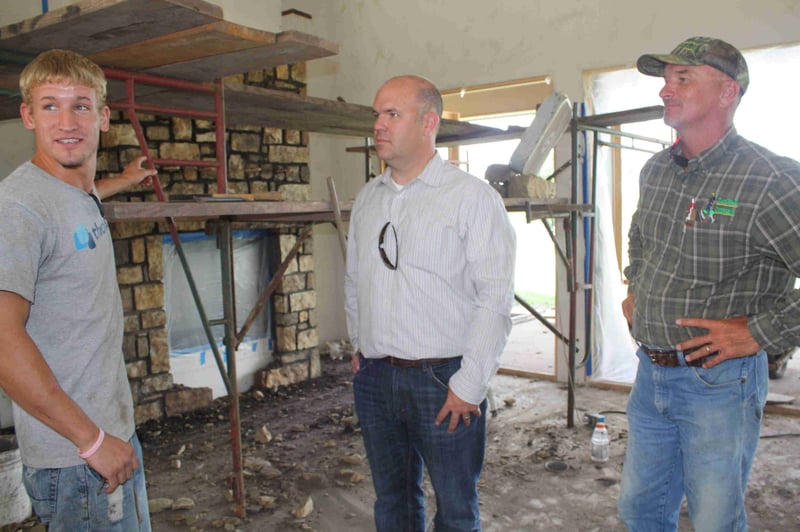 From the Little Dixie Organization:

DURANT – Brothers Matt and Andrew Johnson are on their way.

Through their own dedication, and with help from a unique Little Dixie Community Action Agency program called YouthBuild, these two young men have turned their lives around. They are now aspiring homebuilders in one of Oklahoma's fastest growing communities.

The Johnson brothers grew up in Hugo. Like many young people from struggling families, they did not complete high school. It is a familiar story from places like Southeast Oklahoma, Appalachia, and America's inner cities, where a cycle of despair can destroy the hopes of young people.

That's where YouthBuild enters the picture. It is a network of caring educators and Community Action representatives who seek to break the chains of poverty and illiteracy through training and hands-on work experience.

YouthBuild began in 1988 to address the problems of under-educated youth in America's inner city cores and neglected rural areas. Little Dixie has been operating a YouthBuild affiliate since 2007 as one of only four in Oklahoma.

"We are in our fourth year and already the fruits of our labor are evident," said Steve Tucker, Little Dixie YouthBuild director. "It takes a participant six months to one year to complete their GED training and skills testing for carpentry certificates. From there, it's the job market or higher education. Our YouthBuild participants should learn from Matt and Andrew's example, to know that they all can achieve their goals."

The Little Dixie program cultivates partnerships throughout the region to help its participants with job and school placement. Some, upon completion of a GED and other requirements, choose to enter the workforce or attend college classes.

Matt Johnson graduated from YouthBuild in 2007, and tried college, but said "It wasn't for me." He worked for Hugo electrician Paul Brock for more than a year and at Little Dixie's Weatherization program for an equal amount of time.

But YouthBuild's organizers found some willing partners at Theorem and DanWell Companies, both Durant-based firms specializing in the design and construction of commercial and residential structures.

"We were looking to hire someone who had a skill set that met our criteria," said Theorem architect Shane Knight. "We were looking for someone to grow with the company and make a career out of it. Now (Matt) is my right hand man in the field."

Hired in early June, Knight knew Matt would be a good fit from the interview. After their initial meeting, he took Matt to some work sites and gauged his curiosity and skill level by letting the apprentice ask the interview questions.

"There was awkward silence," Matt said. "So I had to say something. I asked him more questions about the job." Matt, who just turned 21, credits YouthBuild GED Instructor Debbie Greenwood for giving him "pointers" on what to say at job interviews.

Matt and his brother Andrew, 23, moved to Durant together. Andrew works with DanWell Companies, which is a close partner with Theorem. Gerald Daniels of DanWell Companies had high praise for both new employees, and the potential for success created by the YouthBuild program.

"YouthBuild has such a good team in place, it has a lot of potential," he said. "It's a confidence builder for these young people. These skills, it's not rocket science, but you've got to pay attention. YouthBuild kids can do these things, while most other young people, they can't."

Matt instantly added to his skill set at Theorem, installing skylights for the first time in a meticulously designed home west of Durant. He pointed out the lights, cabinets and other features of the home to some current YouthBuild participants in a recent field exercise for the students.

We threw him right into the deep end," Knight said. "He's got the intuition to figure things out. His quality of work and attention has been great. It's been a perfect fit for us."

YouthBuild is looking to create plenty more of these "perfect fits" with three groups of Choctaw County students currently involved in the program. For more information about YouthBuild, call (580) 326-5201 or visit www.littledixie.org.