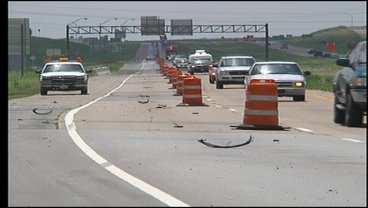 GRAYSON COUNTY--Grayson County may soon get another gateway to the northern Dallas area. Tentative plans are in the works to bring the Dallas North Tollway all the way up to Northern Texoma.

In early July, the North Texas Tollway Authority Board chose a route that straddles the Collin-Denton County line, which could enter Grayson County.

County officials say that Highway 75 does receive a lot of traffic flowing into the Metroplex area. The Grayson County Judge says that the north end of the tollway could possibly start between Highway 84 and 75.

The south end would meet at the Denton, Collin and Grayson County T-intersection.

"Growth plays a major part, probably an integral part of the process of different roads," Drue Bynum said, Grayson County Judge. "Nobody at this point in time can afford to build a road that's not going to be traveled on for years and years in the future. We do see, as the economy picks up, we do see that will spur the growth of the tollway into Grayson County."

TXDOT awarded Grayson County $10 million to study the land for safe highway routes. No definite route has been set.

Grayson County hopes that the project will be completed in less than 10 years.